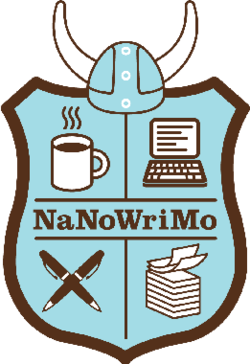 I completely missed the beginning of NaNoWriMo this year. I mean, I know when November 1 happened – it appeared on my calendar. But I forgot it was NaNoWriMo.

Not that I intended to participate this year; I knew how crazy this month would be and knew I would have no time.

But to everyone else who is doing it: Good Luck.

I’m not doing NaNoWriMo. The current WiP doesn’t have another 50,000 words in it. I’m still slightly stuck, so the word count isn’t moving very fast. And I really don’t want to start something new.

If I were on schedule, I could have and it would have been so much fun! (I actually have ideas for several novel -length ideas!) But I’m not so . . . No.

But I thought maybe I could do National Blog Posting Month. You have to post something each day of the month. The closest I’ve come to that is the A-Z Challenge, where you post every day but the weekends. Me, I barely managed it this year. I used the weekends to write some of the week’s posts.

I’ve been blogging for 4 years how and I’ve never managed to blog everyday for a month, weekends and all. I may, however, have gone for a whole month without blogging.

So I’m not really very confident about my ability to do so now. But I suppose it will be an interesting challenge.

I did National Novel Writing Month last year, but I didn’t finish until well after the New Year. I did write more daily than I thought possible, so it wasn’t a loss.

This year, with NaNoWriMo starting the day after tomorrow, I am om the fence about whether or not to do NaNoWriMo this year. Last year was an experience, but I am not sure it is one I want to repeat. I was on the fence even before Sandy arrived and destroyed transportation, likely adding lots more time to my daily commute. So I will probably have a lot less time than last year to do this. Also, large chunks of the city are without power . . . so yeah. Now I am even less sure.

IF I do decide on participating National Novel Writing Month, I will probably write five 10,000 word stories. I have never written so much as one 10,000 word story before and read hardly any. So it won’t be easy. Short stories are their own little world, one I don’t usually gravitate to naturally, so it will be a challenge.

It’s still 50,000 words. 😉 It means writing one story or 10,000 words every five days. Which, yeah, feels scary just thinking about it. Advice, thoughts, anyone?

I don’t actually have ideas for five long-ish short stories, but I imagine they will come. (Yes, pantster, me!)

NaNo ended a few days ago.

I, sad to say, failed NaNo. Not that I am surprised. No, successfully completing NaNo would have surprised me. It’s not just that I am a slow writer (though I am. Very very slow.) It’s just been that kind of month.

But 22000 is still well above my monthly average and I am not really displeased with that number. It’s just that now I realize if things are going well, if I push myself, sometimes I can manage 2000 words in a day. Even when things are not going well, I can write a couple hundred and before I thought 300 was my average.

I am hoping I can finish the WiP sometime this year. At the very least before winter ends.

I am really behind on my NaNo word-count. It’s currently 10418 and as of yesterday, I should have reached 21666 words. So, yeah. Realllllly behind.

The NaNo stats thing tells me I am averaging 744 words a day and I need to write 2329 words everyday if I am going to finish on time.

Part of that is because I spent a couple of days unable to get to a computer at all. So 0 words for a couple days the first week and the last couple days weren’t much better. I wrote about 600-700 words before I had to stop.

Still the site thinks I am averaging 744 a day. Probably my two or three really good days are throwing it off. And by good I mean I managed to write 2000+ words. I am still writing more than I usually manage. I mean, more than 10000 words in two weeks!  For me, that’s fantastic.

So . . . kindle ARC issue. Yesterday I went on netGalley and asked for an ARC of The Serpent Sea by Martha Wells. I got it immediately and I clicked the button to send it to my kindle.

Normally I download netGalley ARCs to my computer, but I don’t have my own computer on hand. I am using someone else’s and I really

didn’t want to go to the trouble of  downloading/installing/authenticating the Adobe Digital Editions software on it. It’s too much trouble.

So I sent it my kindle.

Second, the formatting sucks. Only a few paragraphs are indented properly. Most paragraphs are not and that is just really really annoying. Also, sometimes it has page numbers and odd symbols (a box with a question mark inside).

Really! It’s so hard to read. I’ll probably have to wait until I have my own computer here to read it. Sucks.

I was going to use reading the ARC as a reward for finishing my word-count. Now I can’t.

I am never sending netGalley ARCs to the kindle again. Never never never!

The book No Plot? No Problem! by Chris Baty poses this question: What, to you, makes a good novel?

This is supposed to a pre-NaNo list, and this is probably a bit late. Not only am I deep into my NaNo, but so are a lot of other people.

But I like the question and even if I wasn’t doing NaNo, it is still good to answer it, huh? Or come as close as I can.

Oh, yes, I say something about premise. But that’s vague and could be almost anything really.

The books that I remember, that I talk most about, are the ones with something else.

When I tell people about the Anita Blake books, I say: Anita Blake raises zombies for a living. Sometimes they are used for legal issues, wills and insurance, even criminal cases. She also kills vampires, but they are legal, so she needs a court order before she can kill them. I also tell them to avoid the later books, just stick with the first 8 or 9.

I say nothing about the plot. Well, those things could be plot points (and are sometimes) but I almost never describe a whole plot to someone.

So I guess plot isn’t all that not important to me in the books I read. That is just such an odd thought.

Does anyone else describe books like that to other people?

For those of you who don’t know what is NaNoWriMo, it is the National Novel Writing Month. I call it NaNo. So much shorter.

So, yeah. I’ve a suspicion I won’t make it. But it’ll be fun to try. It’s a way to kick off my second

year with this blog.

Last year, I forgot. I remembered only on the fourth day when I realized half of the blogs in my Google reader were filled with NaNo posts. Too late to even consider NaNo by then.

In case anyone is curious, I am signed up for the NaNo site and this is my profile there: http://www.nanowrimo.org/en/participants/sonialal

I am afraid some things will suffer during NaNo. Reading, twitter, the blog and its weekly memes: Friday flash, teaser Tuesday.