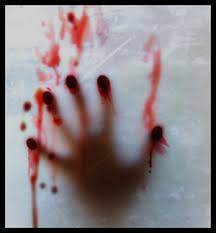 I had a nightmare today. Last night, rather. I dreamed of blood and death and romance. It was a whole story, but such a terrible one.

There is a whole dead family. Blood splashed on the walls, the carpet is dark with it, and the family is hacked up like a butcher went on a rampage. The parts are scattered around the house like they were decoration.

In the way that only makes sense in dreams, I know a serial killer did this, that he is going after his real family and that somehow he cannot get to them and he is substituting other people.

Than my dream cuts to the guy and the girl who are getting out of her car. They share a long kiss. He is Russian and an accountant; the girl is  FBI. The guy is the serial killer’s son. He knows, somehow, what his father has done and hasn’t told his girlfriend (the FBI girl).

Next, my dream shows me the guy and his brother. Brother has been stabbed lots of times. He is dying, his hands are covered with blood, and he whispers a girl’s name to the guy.

So than the girl takes the guy into the kitchen and he sobs out his whole story. Yes, sobs!!! Great wrecking sobs, because his heart is breaking. His life is surely breaking.

He and his family used to live in Russia, fled to the USA when his father killed their grandmother and other family. I saw the images in the guy’s head; the father was standing over the grandmother and they were both covered in blood, blood, blood. Anyway, here, him, his mother and siblings moved from state to state, city to city, never staying very long in one place. They thought they had lost him when that family down the street was killed. Exactly the same way dad had killed grandmother and cousins.

He wanted to move, but mother didn’t want to. She thought they were safe, that it was coincidence and now they are all dead!!!

Than, in my dream, he lunges up and grabs the girl and insists she must protect his sister. Mother had given her up, to protect her from this life, to keep her from Dad. But brother said her name with his last breath and somehow Dad knows about her. She must protect her, she must –

That’s when I woke up. I couldn’t go back to sleep again. I kept seeing the killed family, the dying brother and the dead grandma over and over in my head. It was pretty horrifying. If I was younger, I would have crawled into my parent’s bed.

I tell you, all the blood was damn scary. There is enough for a whole novel, but if I ever write this story, it will be as romantic suspense. Because I am pretty sure I couldn’t deal with it as anything else. I would need the sweetness of a romance to balance out everything else.

I also don’t know what I watched or read to have so sick a dream, especially on Christmas! But I tell you, for the next few days, I am watching only Christmas movies and reading sweet romances.